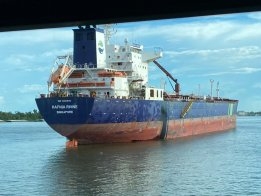 Up to 2,100 gallons of fuel oil was spilled, contaminating 50-60 barges in the area. Image Credit: US Coast Guard

As much as 2,100 gallons of fuel oil has been spilled during a bunker operation on the Mississippi River.

The oil was spilled during a bunker operation involving the tanker Hafnia Rhine at the Ama Anchorage in Louisiana on Thursday evening, the US Coast Guard said in a press release.

The cause of the spill is under investigation.

"The OSROs have placed 2,700 feet of containment boom and 3,320 feet of sorbent boom around the affected area including the contaminated vessels and have utilized the use of sorbents to recover oil product.

"The Coast Guard is committed to overseeing a timely clean-up of oil to mitigate environmental impacts through its coordination with partner agencies and the continued assessment of shorelines and waterways.

"There have been no reports of impact to wildlife."

Officials say the trip won't result in more output, but Biden says it will.

Wind power techology to be used on newbuilds to reduce transport CO2 emissions.