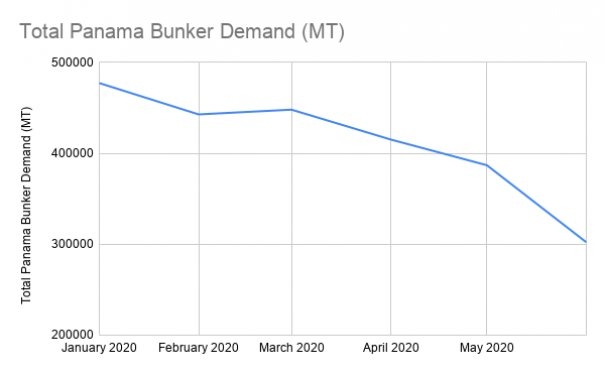 Bunker demand in Panama dropped sharply in June, according to preliminary data from the Panama Maritime Authority (AMP).

Increased competition among bunker suppliers in the US Gulf may be behind the stark decline, Paul Hardy, head of business development at brokerage NSI, told Ship & Bunker Friday.

The USGC has seen especially aggressive market moves by refiners.

Earlier this year industry association IBIA reported one of its members estimating bunker demand in the US may have dropped by as much as 20-30% for parts of this year.

"The USGC has seen especially aggressive market moves by refiners keen to maintain tanks flowing and keep the barges moving," Hardy wrote in a note to clients earlier in the week.

This competition has shown up in price spreads in the region. Very low sulfur fuel oil (VLSFO) delivered at Balboa was at an average $33.30/mt premium to Houston's levels in June, according to Ship & Bunker pricing, compared with a premium of $24.95/mt the previous month.

The cruise giant's largest ship is the fourth LNG-powered vessel to enter its global fleet.

Analysts are also concerned about OPEC ramping up output next month.