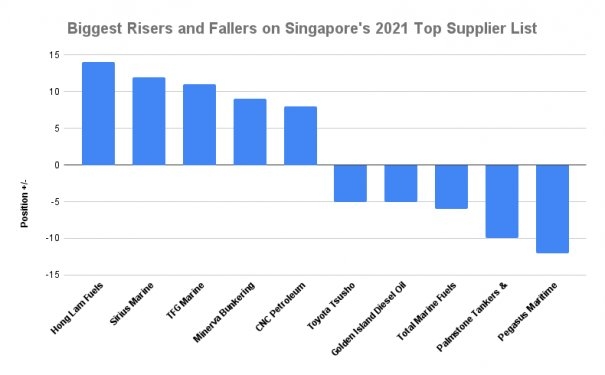 The official ranking is provided annually by Maritime and Port Authority (MPA). While the exact volume of bunkers sold is known to the MPA, it is not published.

PetroChina moved up from fourth place in 2020 to the top this year, according to the list the MPA published on Friday, having also been in first place in 2019. Equatorial Marine Fuel Management Services remained in second place, and Shell Eastern Trading fell from first place to third.

Trafigura-backed TFG Marine moved up by 11 notches to fifth place, fulfilling its plan announced in November to be a top five supplier in Singapore. Vitol Bunkers gained six places to fourth, and Minerva Bunkering advanced by nine places to 13th. TFG and Minerva won their Singapore bunkering licences in April 2020.

France's Total Marine Fuels had a sharp fall for a second year, dropping by six places to 19th. Total had been in sixth place in 2019.

Bunker B Pte Ltd has now been at the bottom of the list for three straight years. The firm's rank may partly be explained by its focus on distillates rather than the full range of marine fuels.

About 200 ships have received the fuel from Glencore and PetroChina in Singapore.