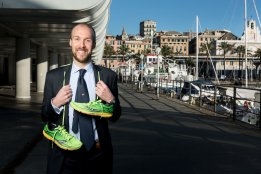 Timothy Cosulich, who heads up the Fratelli Cosulich Group of companies, has overseen the expansion of the company in Singapore.

"I've lived here for several years and its reputation as a great place to do business is well deserved," Cosulich tells Ship & Bunker.

The introduction of mass flow metering (MFM) of bunkering operations in place from the start of last year is another reason to be upbeat about doing business in Singapore.

Cosulich was among those to welcome the move which he says creates a level-playing field where the Singapore bunker market's many players can now compete on the same basis.

"When the company first set up shop [in 2012], it was a very competitive market," Cosulich explains. But what made it harder was the added factor of what can only be called cheating by some players.

"We would find that our prices were regularly $10-15/mt higher than the cheapest in the market."

While all players will do their best to compete, some were undercutting the going rate by various means. The so-called 'cappuccino effect', where the volume of delivered bunker fuel is inflated by adding air, being the most well-known ruse.

He acknowledges that such practices made it difficult to compete commercially although in the early days his company had its core clients.

But the introduction of MFM by the Maritime and Port Authority of Singapore (MPA) has changed all that.

Since MFM was brought in there has been a sea-change in the way the Singapore bunker market operates.

"Since January last year the bad practices associated with Singapore bunkering have been disappearing". That allowed the Fratelli Cosulich bunker operation to move ahead on volume.

"Last year was good for us in terms of growth".

For want of a better analogy, MFM acts as referee for the bunkering process as all the pertinent data of the operation is recorded electronically. That information is available in the bunker profile which the customer can ask to see.

Cosulich has been impressed with the way the MPA has been committed to making MFM work. And the commitment was clearly illustrated last year when three of the biggest bunker firms had their bunkering licences withdrawn over irregularities around delivering bunkers under the MFM system.

"These were big players," Cosulich notes.

His company's position in the Singapore market translates into a 5% market share for sourced and delivered bunkers with around a 20% share on just deliveries.

The Fratelli Cosulich barge fleet stands at seven and might grow by at least one more in 2018 physical supply being its primary focus.

"I see the company primarily as a logistical services provider," says Cosulich.

And, thanks to MFM, a logistical provider able to compete in the open market knowing that everyone else is doing just the same.

To comply with 0.5% sulfur cap on bunker fuel starting next year.