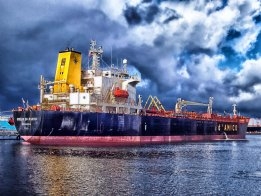 Dry bulk operator Pacific Basin will use a "balanced approach" in meeting its obligations under the IMO2020 rule on reduced sulfur in bunker fuel.

The company, which has a fleet with smaller and larger ships, will use the more expensive, low-sulfur fuel for its handysize segment but fit its bigger ships with emissions cleaning equipment or scrubbers.

"We have arrangements in place with repair yards and scrubber makers to install scrubbers on a majority of our owned supramax vessels," the company said in its half-year results.

However, it will not fit the equipment on its 82, owned, handysize ships.

Overall, the company said that it expects that around 85-90% of its handysize and supramax fleet to use low-sulphur fuel leaving the rest of the fleet operating with scrubber units and cheaper, high-sulfur bunker fuel.

That combination, of scrubbers and low-sulfur fuel, allows for "some optionality in how we manage our fuel needs to comply with the new rules", the company said.

So far, ten of its supramaxes have scrubber units installed.