HSFO Now Takes Up Quarter of Bunker Demand in Singapore 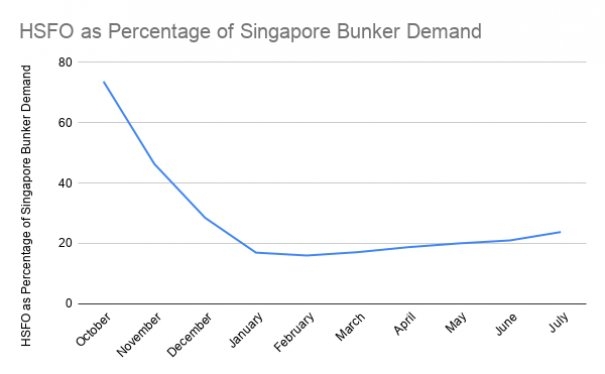 HSFO sales were 24% of the total for Singapore in July, according to preliminary data from the country's Maritime and Port Authority (MPA). Its market share was up from 21% in June, and has been steadily rising since February.

HSFO sales collapsed worldwide towards the end of last year with the advent of IMO 2020 as shipowners started switching to burning very low sulfur fuel oil (VLSFO). They dropped to just 16% of Singapore demand in February.

The rise since then is more likely to have been as a result of ships with scrubbers shifting their bunker purchases to Singapore than an outright rise in demand for HSFO, according to Adrian Tolson, director of marine consultancy BLUE Insight.

"Singapore was always going to be the focus of vessels with scrubbers installed -- it was the big ships, large containers, VLCCs and Capes that installed scrubbers," he told Ship & Bunker Thursday.

"There may also be more ships slowly but surely coming out of the yards."

The number of container ships left inactive while they undergo scrubber retrofits dropped to just 28 as of July 20, shipping intelligence service Alphaliner reported this week, down from 36 ships in its previous survey.

The HSFO rise may also be explained by bunker demand from scrubber-equipped tonnage congregating at the larger hubs as other ports stop offering the product, Tolson said.

Rotterdam also showed significant levels of HSFO demand in the second quarter at 25% of the total, although that was down slightly from 26% in the first quarter.

Had the spread between HSFO and VLSFO been higher, one explanation might have been an increase in non-compliance with the 0.50% sulfur limit.

Earlier this year shipping industry group the Trident Alliance told Ship & Bunker it would be monitoring bunker demand data for any rise in HSFO demand that might indicate non-compliance was increasing.

But with the HSFO-VLSFO spread at just $69/mt in Singapore on Wednesday -- compared with $367.50/mt at the end of last year -- the saving to be made by not complying with the sulfur limit is unlikely to be attractive enough for most shipowners.

The company is working with Kawasaki Heavy Industries and Yanmar Power Technology on the project.

The average global spread between VLSFO and HSFO stood at $136/mt on Monday.