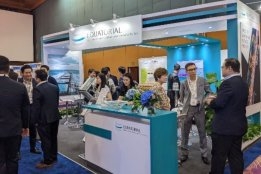 The firm was promoting its services in the exhibition hall at Sibcon on Wednesday. Image Credit: Ship & Bunker

The firm has obtained its International Sustainability and Carbon Certification, and can offer B5, B10, B15, B20 and B24 blends, a representative told Ship & Bunker on the sidelines of the Sibcon industry event in Singapore on Wednesday.

The firm is largely targeting sales to harbour craft and other smaller vessels for now, the representative said, but it has also received interest from large global shipping companies for 300-500mt biofuel stems for trials.

The Maritime and Port Authority listed Equatorial Marine Fuel as its second-biggest bunker supplier by volume last year, after Petrochina.