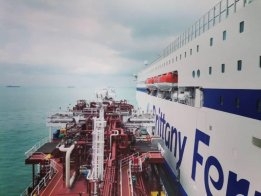 Titan LNG and energy company Petronas have bunkered a new gas-powered cruise ship in Malaysia before its first voyage to Europe.

The two companies bunkered Britanny Ferries' new vessel the Salamanca with LNG at the Pengerang Anchorage in Malaysia on December 17, Titan said in a LinkedIn post on Wednesday.

The LNG delivery vessel Avenir Advantage was used for the operation.

The Salamanca is due to start operations in the Mediterranean next year. Spanish energy producer Repsol has built an LNG terminal at Bilbao which will be used to refuel the Salamanca and its sister ship, Santoña, upon its arrival in 2023.

Titan LNG and Petronas joined forces to carry out the first ship-to-ship bunkering in Malaysia in November 2020.

The MCA has detained the Spirit of Britain after port state control inspectors found a number of deficiencies.

The port will target lower emissions by upgrading technology, improving infrastructure and equipment and making use of alternative fuels and clean energy sources.

April's total of 51 new LNG-fuelled ship orders is 'well ahead' of last year and was driven mainly by orders for large oceangoing ships.