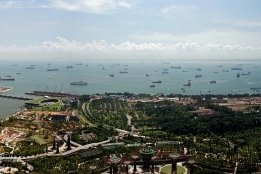 A recent op-ed suggesting that the need for onboard bunker surveying in Singapore is coming to an end has been dismissed as shortsighted.

The trader's opinion piece argued that the decline began with the 2017 introduction of MFMs as the meters' reading is deemed final and indisputable.

With COVID-19 restrictions now also in place that limit on-board interactions, "maybe [it] is a good time for owners to learn how to go without surveyors," they added.

"Singapore port authority should come up with certain checklist or manual so C/E can can do the inspection themselves."

Abdul Farhan, a highly experienced surveyor and General Manager Far East at Seahawk Services, was among those who dismissed the suggestions as "narrow minded."

The BDR might not be able to be challenged at the time... but with the help of a good surveyor you strengthen your position to negotiate for the future and hopefully avoid malpractice

"Having a broad knowledge on the industry and surveyors job scope doesn't only limit his work to only taking a photograph of the Mass Flow Meter totaliser before and after and assuming his task is completed," commented Farhan.

"A Bunker surveyor in all ways has much more task than what the blogger might look at it."

Those tasks include: acting as a third party to be the eyes and ears of the customer; taking on the responsibility to ensure there are no exceptional delays caused to the entire bunkering operations by coordinating with the agents, bunker barge and the chief engineer / master of the vessel to ensure no other activity happens on the shipside; ensuring proper sampling is adhered to onboard as per SS600/SS648 standards; when engaged by charterers, being entrusted to check and report the vessel ROB on arrival to avoid crew participating in "buy back" scams.

Christopher Bieda, BQS Operations and Training at Lloyd's Register, meanwhile, said it was a "massively short sighted view by the author."

"Surveyors are there to protect all of your interests. They are skilled individuals well versed in international / national legislation but most importantly local knowledge of each tanker and supplier.

"The BDR might not be able to be challenged at the time... but with the help of a good surveyor you strengthen your position to negotiate for the future and hopefully avoid malpractice."

Talk of MFMs bringing about the demise of bunker surveyors is nothing new. But neither are the surveying community's repeated assertions to the contrary, which is also backed up by the reality of today's demand for surveyors in Singapore and examples where surveyors have proven invaluable during the country's MFM-era.

Among the most notable of those is the 2019 discovery by surveyors Petro Inspect of suppliers in Singapore using magnets to manipulate MFM volume readings.

But Kemp believes the pullbacks are only temporary.

SMW 2021 to focus on trends in shipping, including the rise of alternative marine fuels.