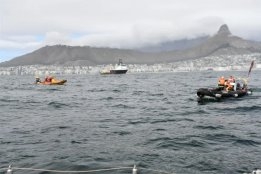 Bunker operations at Algoa Bay in South Africa have been suspended after a fuel spill earlier this week during a ship-to-ship transfer between two vessels operated by Minerva Bunkering.

The spill took place in Algoa Bay on May 23 during a transfer between the tanker Umnega II and the barge MT Lefkas, both operated by Minerva, the South African Maritime Safety Authority (SAMSA) said in a statement on its website on Thursday.

Five oil recovery vessels are being used to collect the oil, and all of the visible heavy oil had been collected by Tuesday afternoon, according to the statement. Air surveillance is also being used.

"Concerning the immediate fate of the two tankers involved in the oil spill incident, the authorities said the vessels were still alongside each other on location of the incident while a decision was being made on how best to further handle them," SAMSA said.

The inflation that came alongside this year's advance in energy markets is now raising concerns over the central-bank response bringing a global recession.