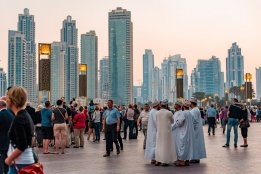 The new hire is based in Dubai. File Image / Pixabay

Konstantinos Kontogiannis has joined the firm as its bunker manager in Dubai as of this month, he said in an update to his LinkedIn profile on Tuesday.

Kontogiannis had previously served as a Dubai-based bunker trader for Integr8 Fuels from September to December of last year, and had earlier worked in a variety of roles for Glander International Bunkering from 2015 to last year.

Lila Global has a fleet of 35 bulkers carrying more than 30 million mt of cargo per year, according to the company's website.

The company is looking for candidates with a proven track record in trading physical methanol.

The firm took delivery of the methanol tanker Stena Prosperous on Thursday.