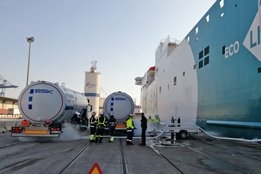 Spain's Baleària Eurolínias Marítimas S.A. (Baleària) has upped its LNG bunkering capabilities with the launch of a new high-efficiency fuel delivery system in the port of Valencia.

The so-called Multi Truck to Ship (MTTS) system allows simultaneous supply from several tank vehicles, increasing the overall transfer speed of fuel to between 80 and 120 m3/h.

This compares with a discharge speed between 30 and 50 m3/h for single tank systems, the ferry firm notes.

The first stem conducted using the MTTS system was concluded last month, which will now used daily following approval from the Port Authority of Valencia.

Baleària currently has four LNG-powered ships, with four more arriving this year followed by a ninth in 2021.

Coronavirus Causes More Losses For Crude, While Libyan Shutdowns Described As "A Bullet In The Head"

Still, one analyst thinks traders have overreacted to the virus.

Firm says a sale and purchase agreement has been signed.