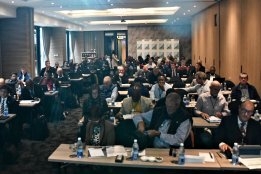 South African maritime industry stakeholders are ready for the upcoming global 0.50% sulfur cap on marine fuel, but the country has been urged to speed up putting the "final cog" in place - legislation that transcribes the new sulfur rules into local law.

South Africa’s Alternate Permanent Representative to the IMO, Sipho Mbata, says he is confident that crafting the legislation in time will be achievable in the form of an annex to existing law.

The alternative of a bill process would take anything up to two years, he added.

Enforcement has repeatedly been identified as critical to a successful implementation to IMO2020, but concerns over authorities' readiness for this persist.

While a failure to transcribe the new sulfur rules into local law would effectively render authorities toothless, the prospect of a "soft start" to IMO2020 have been further fuelled by Indonesia's position that it will not enforce the new rules for its domestic trade.

Fujairah VLSFO was last assesed below Singapore on 3 October.