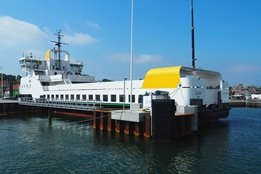 As technology develops, switching from bunkers to battery-power is becoming an increasingly realistic option for shipowners. Showcasing this evolution is a new all-electric ferry that is poised to set new standards for what is possible today using zero-emissions technology.

The Ellen E-ferry will be operated by Ærø Kommune and is the world's most powerful fully-electric ferry, featuring the largest battery pack currently installed for maritime use, and will ply a 22-nautical mile route that is seven times further than any other electric ferry currently in operation anywhere in the world.

The vessel is said to be close to entering passenger operations in Denmark following its June 1 baptising ceremony.

The 60m long vessel is capable of carrying 198 passengers in summer months (falling to 147 during the winter) plus 31 cars or five trucks. It will operate between the Danish islands of Ærø and Fynshav.

The 4.3Mwh battery pack will help propel the ferry at speeds between 13-15.5 knots. It is also the first electric ferry to have no emergency back-up generator on board.

"Ellen is an excellent example of the future for electric transport: cleaner, greener and more efficient. It is a great project which demonstrates the potential for electric ferries to end users and the industry itself," said Kim Fausing, CEO of Danfoss, whose firm supplied the full-electric drivetrain, power management system and onshore charging station.

"It is an EU project and will be an exemplar for electric transport for many years to come."

Rio Tinto Requires Shipowners Not to Use Bunkers From Hin Leong

The new wording in the bunker supplier clause asks shipowners to confirm their vessels are not carrying bunkers supplied by Hin Leong, its marine fuels unit Ocean Bunkering or any other related companies.