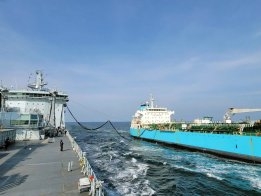 Transfers from commercial tankers at sea could be carried out when military tankers are unable to visit ports to take on new cargo. Image Credit: Royal Navy

The UK's Royal Navy is investigating the possibility of using commercial tankers to bunker its warships in times of crisis.

The Royal Fleet Auxiliary ship Tidesurge recently connected with the commercial tanker Maersk Peary in Lyme Bay as a test of ship-to-ship fuel transfers at sea, the Royal Navy said in a statement on its website last week.

Transfers from commercial tankers at sea could be carried out when military tankers are unable to visit ports to take on new cargo.

"The Royal Navy relied on extensive support from civilian tankers during the Falklands conflict 40 years ago – sustaining a task group 9,000 miles from the UK," the Royal Navy said in the statement.

"But in more recent years, that support has not been needed, nor training practised."

No fuel was passed between the two vessels during the trial operation, conducted in partnership with the US Military Sealift Command. The operation was designed to prove that the commercial tanker could connect with the military vessel at sea.

"Replenishment at sea from a commercial tanker to a Fleet Replenishment Oiler can ensure our navies remain supplied and supported in a contested environment when port visits for resupply can't be accomplished," Captain Douglas Jaarsma, US MSC exchange officer with the Royal Fleet Auxiliary, said in the statement.

But all signs indicate that "turbulence" lies ahead.

LG Chem says move is to use hydrogen in the production of renewable bio-feedstocks.