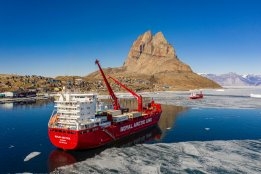 A fuel-saving system developed by marine technology firm Frugal Technologies has been a hit with shipping company Royal Arctic Line which had it installed on one of its ships.

According to the company, the reduction in carbon dioxide emissions and cost savings on fuel mean that it will consider the package for other ships.

Frugal said that average fuel consumption savings are between 10% and 15% with a relatively short timeframe.

Technology aimed making ships more efficient and therefore more environmentally friendly is seen by many as the key to reducing the industry's carbon footprint.

Vessel controlled by Indonesian interests but reason for detention unclear.

The fuel, produced from used cooking oil and an algae derivative, was produced at Euglena's plant in Yokohama.