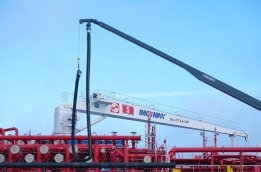 The Stena Immortal has already received its fuel for the test run. Image Credit: Stena Bulk

Swedish shipping company Stena Bulk is set to test 100% biofuel bunkers on board one of its MR tankers, the company said Friday.

Stena has already bunkered the Stena Immortal at Rotterdam with a product produced from used cooking oil by GoodFuels, the company said in an emailed statement.

"We want to be able to offer our customers additional options with less environmental impact in the future and by conducting the trial in normal operations we want to show that being sustainable doesn't have to interfere with core business," Erik Hånell, CEO of Stena Bulk, said in the statement.

Stena Bulk joins a growing number of companies ... who in recent months alone have been active in the use of biofuels

Interest in the use of biofuel bunkers has increased significantly over the last year as they are seen as a promising route for the industry to meet its IMO 2030 and IMO 2050 GHG emissions reduction goals.

For the the bio-bunkers being used in Stena Bulk's trial, GoodFuels says its "MR1-100" fuel lowers carbon dioxide emissions around 83% compared to conventional bunkers if considered on a full life cycle perspective that includes the production and distribution of the fuel.

The trial's use of a 100% biofuel product is also noteworthy. As biofuels remain significantly more expensive than traditional fuels, many shipowners have favoured the use of biofuel blends to reduce cost.

Stena Bulk joins a growing number of companies including Hapag-Lloyd, MSC Mediterranean Shipping Company (MSC), and CMA CGM who in recent months alone have been active in the use of biofuels.

The firm is looking for candidates with a relevant education in the law or compliance, as well as three to five years of experience in a similar role.