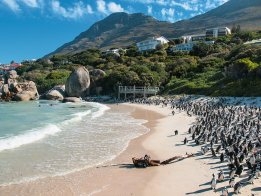 Conservationists have singled out bunkering in Algoa Bay, South Africa as a credible threat to nearby penguin colonies.

Ship-to-ship fuel transfers have been allowed in the bay area under a government policy to develop the 'blue' economy.

But recent oil spills from bunkering have highlighted the threat to wildlife in Algoa Bay which hosts the largest remaining African Penguin colony, according to South African news provider the Conversation.

Conservationist group Birdlife South Africa has said its concerns about bunkering in the area have been ignored.

The organisation is calling for a stay to ship-to-ship bunkering until a thorough cost-benefit assessment of the practice has been conducted, according to the report.

The design can work with low-density as well as conventional bunker fuels.