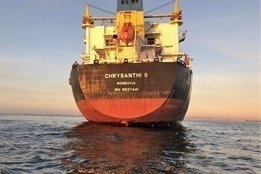 South Africa is facing calls from tourism and conservation groups to stop bunkering in Algoa Bay.

Nelson Mandela Bay Tourism (NMBT) is set to hold a meeting to discuss the matter this week.

Concerns over whether the benefits that bunkering brings to the local community outweighed its risks were raised amid news that a third supplier was set to be awarded a licence to supply fuel in the environmentally sensitive area.

The concerns were seemingly justified earlier this month after a spill during bunkering has so far left over 120 birds oiled.

It is the second spill in the Bay since bunkering begin in 2016.

"We need to consider the substantial revenue tourism and especially marine tourism bring into Nelson Mandela Bay and the viability of bunkering considering the damage that could be done to this tourism industry," a local whale watching operator told local media.

Oil Sinks Further Below $80 Amid A Broader Equities Sell-off

A host of factors contributed to bearish sentiment within crude circles.

Mediterranean SECA and flashpoint in the bunker note among agenda items.