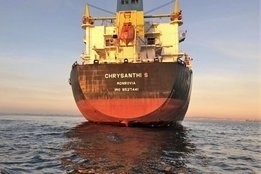 The Liberia-flagged MV Chrysanthi S has been fined R350,000 ($25,000) for its part in a marine fuel spill earlier this month during bunkering operations in Algoa Bay.

A guarantee for R5m ($360,000) in security to cover the cost of cleaning up the spill has also been obtained, local media reports.

Over 120 birds, including 90 adult African penguins and 13 penguin chicks, have so far been identified as having been oiled in the spill.

In the weeks prior to the spill, talk of a third bunker player entering the market prompted local businesses to question the risks and benefits of bunkering in the tourism-heavy area.

Bunker Prices: Don't be Fooled by What you See at the Moment

The picture is being heavily influenced by panic and short term transitional logistical issues. The future is going to be very different.