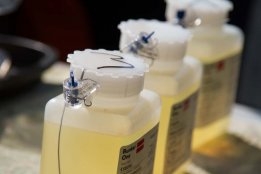 Marine fuel supplier Bunker One has reviewed its experience with the transition to very low sulfur fuel oil (VLSFO) so far and found that initial quality problems seem to be disappearing.

The company had initially found stability problems with total sediment potential (TSP) being tested much higher than the fuel's total sediment accelerated (TSA), it said in a statement on its website.

"Those fuels are actually on spec, as TSP does not have to be tested if TSA is within the limit of 0.1%," Bunker One said.

"This phenomenon might create situations where doubtful suppliers could reject claims on technicalities, even if the products were impossible or close to impossible to handle onboard the ships.

"Fortunately, those fuels seem to have disappeared and we once again experience very few quality claims."

Compatibility between the various VLSFO blends on the market has been less of an issue than expected, the company said, as most appear to be falling close to the aromatic end of the aromatic-paraffinic scale.

"We are also experiencing hardly any compatibility issues, maybe even fewer than pre-2020, which indicates that the very paraffinic products are absent in the market."

But the suddenly bearish sentiment is unjustified, says Flynn.

Fastrig can be fitted to commerical ships, say developers.

The organisation has tested a number of MGO samples from Singapore in the past month with flash points of 57 to 59°C.