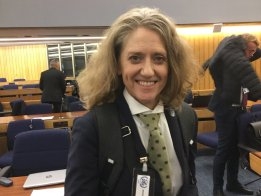 Research in hydgrogen as marine fuel has picked up since 2017, according to Madadh Maclaine of the Zero Emission Ship Technology Association, who highlighted 14 hydrogen-fuelled ship projects.

Speaking at the International Maritime Organisation symposium on alternative fuels in London, Maclaine said out of the 14 projects, four ships are operating. That group includes the French experimental vessel Energy Observer.

Another four ships are in the process of being built while an additional six projects have the funding in place but construction work has yet to begin.

At each stage, the multiples of electrical power coming from these projects have increased.

"The hydrogen-fuelled ships yet to be built involve multiples of megawatts of power," Maclaine said.

Early experiments in this type of marine energy in the 1980s involved up to 10 kilowatts of power.