New Bunker Operation Launches at Port of Lowestoft in UK 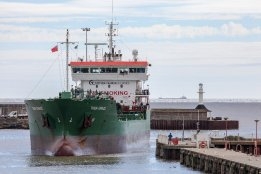 The first bunkering, of the Thun Grace, was carried out at the port on Wednesday. Image Credit: Associated British Ports

A new bunker supply operation has launched at Lowestoft in the East of England.

The port's owner and operator, Associated British Ports, has invested £250,000 in the project to bring bunker supply there, it said in a statement on its website Thursday.

The first bunkering, of the Thun Grace, was carried out at the port on Wednesday.

The operation is being run as a strategic partnership between fuel supplier GEOS Group and logistics company Peterson UK.

"This new fuel bunkering facility provides operators from the oil and gas and offshore wind sectors with another reason to use Lowestoft as their port of choice, with capability and capacity now in place to service any vessel that comes into the port," John Shade, UK fuel manager at Peterson, said in the statement.

The new operation may be of particular use to tankers waiting off nearby Southwold -- frequently a gathering-point for tankers being used as floating storage in the North Sea at times of high storage demand.