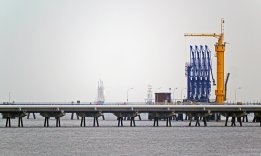 A new hydrogen hub in northern Europe is under consideration by oil major BP.

The hub would be located in Wilhelmshaven in Germany and could include an ammonia cracker to generate low-carbon hydrogen from green ammonia from 2028.

"At BP we have the expertise and capacity to cover the entire value chain of green hydrogen production, including conversion into derivates like ammonia, transport,and then reconversion to supply green hydrogen to the customers and places who need it," said Patrick Wendeler, chief executive of BP Europa SE.

Green ammonia – produced by combining nitrogen with hydrogen derived from the electrolysis of water using renewable energy sources – is expected to be shipped to the site from other BP green hydrogen projects.

The cracker converts the green ammonia into green hydrogen by splitting the larger molecule into its smaller nitrogen and hydrogen components .

It's anticipated that up to 130,000 metric tonnes of hydrogen could be produced annually from the site, with scope for further expansion as the market for future fuels develops, according to BP.

Hydrogen is one of a range of low-carbon fuel options that may be taken up by the shipping industry.

The catamaran design will have applications in the offshore wind, commercial workboat and leisure sectors.