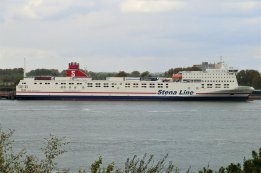 Carbon dioxide (CO2) output from Stena Line's ships fell by 11% in 2021 compared to the previous year, the company has said.

Measured per metric tonne of cargo carried over a nautical mile, the company said it had shaved 4% from total ship emissions compared to pre-Covid operations.

The fall in CO2 output is credited to a higher utilisation of its fleet. In addition, port operations and lay times have benefited from using 100% renewable electricity while 20% of Stena Line's terminals used shore power when berthing, according to the company.

Looking ahead, the company has a pilot project using recycled methanol from the steel sector as alternative bunker fuel.