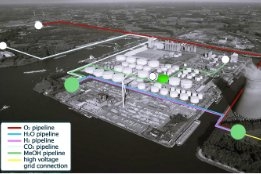 Ten private- and public-sector partners today jointly announced the formation of a new project to being methanol bunkers to the Ghent part of North Sea Port.

The North-C-Methanol is part of the North-CCU-Hub programme whose partners include ENGIE, Fluxys, and Mitsubishi Power.

The project envisages the construction of two large-scale demo plants and supporting infrastructure on the Rodenhuize peninsula in North Sea Port.

The first plant, a 65-MW electrolyser, is being erected on the ENGIE site. This hydrogen plant will convert water into green hydrogen and oxygen using wind power.

The second plant, a Proman methanol plant on the Rodenhuize peninsula, will use this green hydrogen to convert the collected CO2 emissions into "green" methanol that can then be used as a marine fuel, amongst other uses.

With an investment value of EUR 140 million ($166 million) the group have set a long-term aim of realising an overall annual reduction in CO2 emissions of 1 million tons in North Sea Port.

While current uptake of methanol bunkers is limited, it is a promising candidate for a fuel of the future thanks to its wide availability and favourable emissions footprint.

As it is a liquid fuel at ambient temperature, unlike LNG it is practical to convert oil-based bunkering assets to supply methanol.

The vessels will have CO2 emissions at least 10% lower than the company's previous generation of shuttle tankers.

The firm has taken delivery of the 23,992 TEU ship EVER AIM.