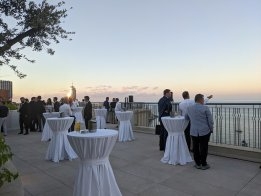 The event kicked off on Tuesday morning with a day of training led by Nigel Draffin, followed by a welcome reception in the evening. Image Credit: Ship & Bunker

Delegates are gathering for IBIA's latest bunker conference in Malta.

The industry body has 160 people registered for the IBIA Mediterranean Energy and Shipping Conference, a representative told Ship & Bunker on Tuesday. The event is being hosted at the Malta Marriott Hotel & Spa in St Julian's from 13-15 September.

The event kicked off on Tuesday morning with a day of training led by Nigel Draffin, followed by a welcome reception in the evening.

That will be followed over the next two days by presentations and panel sessions, a gala dinner and a visit to the Evos tank terminal network and Enemed tunnel underground fuel storage installation.

Keynote speeches on September 13 are being delivered by Miriam Dalli, minister for the environment, energy and enterprise, and Aaron Farrugia, minister for transport, infrastructure and capital projects.

Ship & Bunker managing editor Jack Jordan will be moderating a panel looking at the impact of this year's geopolitical events on the Mediterranean and Black Sea bunker markets.

IBIA is also hosting its Annual Convention 2022 in Houston later this year.

Readers can access a 10% discount on registration costs by clicking here and entering the code SB10 when prompted.

To operate in the city harbour from 2024.