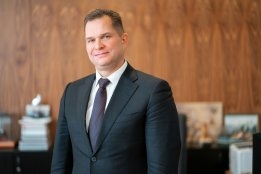 Russian energy company Gazpromneft expects LNG to take a growing share of the bunker market, according to the head of its marine fuels unit.

"I'm convinced that with the development of onshore and bunkering infrastructure, shipowners will assess the advantages of LNG and choose in favour of natural gas fuel in the medium term," Alexei Medvedev, CEO of Gazpromneft Marine Bunker, said in an interview published on the company's website Wednesday.

Medvedev also noted the dramatic decline in high sulfur fuel oil (HSFO) demand for bunkering -- a key concern for suppliers in Russia, which have traditionally relied upon the country's ample HSFO supplies and low prices to attract demand.

"The new environmental requirements will significantly change the structure of the marine fuels market," Medvedev said.

"Where the share of heavy oil products was previously about 70%, in the coming years it will drop towards 15-20%."

But the company has still been able to hold onto its market share so far, Medvedev said, with bunker sales in the first quarter about 5% higher than in the same period a year earlier.