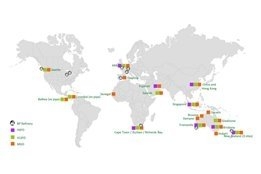 BP Marine says it is adding the Spanish port of Valencia to its supply locations for IMO2020 compliant bunkers.

The supplier says it will operate a dedicated bunkering barge with a capacity of 4000 metric tonnes, offering 0.10%S MGO. It did not say if there were any plans to offer 0.50%S VLSFO as well.

The barge will load the fuel from BP's Castellon Refinery, which is located approximately 75km north of Valencia.

"Fuel incompatibility is one of the main challenges our customers are faced with as the industry is shifting to cleaner fuels. Our early market entry with MARPOL 2020 compliant marine fuel demonstrates BP Marine's commitment to the industry and vessel owners to ensure availability with enough lead time to allow for a smooth transition to low sulphur fuel," said Eddie Gauci, global head of BP marine.

"We believe that an offer of the low sulphur marine gasoil variety DMA in the region will benefit our customers and the region."

Supply in Valencia comes in addition to the several other global Ports BP announced in March.

Monjasa is reaching out to other parties in a project aimed at making the bunker industry more data-driven and transparent.

The companies aim to work together to develop carbon emission reduction strategies for the shipping industry.