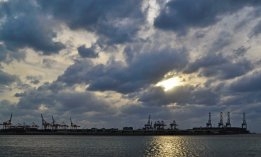 The ship was hit while discharging cargo at Jeddah. File Image / Pixabay

An explosion has hit a tanker owned by Hafnia at the Saudi Arabian port of Jeddah, the company said Monday.

The BW Rhine was hit "from an external source" at Jeddah at about 12:40 AM local time on Monday, causing and explosion and subsequent fire, the tanker operator said in a statement on its website.

The tanker was discharging its gasoline cargo at the time. All 22 seafarers on board have been accounted for, with no injuries, the company said.

"It is possible that some oil has escaped from the vessel, but this has not been confirmed and instrumentation currently indicates that oil levels on board are at the same level as before the incident," Hafnia said.

The authorities allege the ship continued after a collision.

The profitability of scrubbers dropped dramatically last year as the price spread between VLSFO and HSFO narrowed.