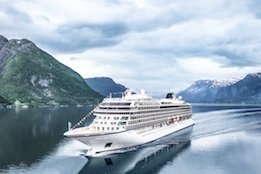 Viking Cruises is aiming to construct the hydrogen-powered ship based on the same design as their current ocean cruise ships.

Fossati noted that Viking Cruises is currently in discussions with Statoil ASA (Statoil) to find a liquid hydrogen supply solution based on a Norwegian refinery.

Viking Cruises says the hydrogen-powered newbuild would be registered in the Norwegian Ship Registers (NIS) upon completion.

"As a Norwegian and with Norwegian ships, we want to lead the way to zero-emission ships through fuel cell technology. The road to that point is still long, but here at Viking we want to be ahead of the game," said Torstein Hagen, Chairman of Viking Cruises.

The GCMD has issued invitation for proposal to study the challenges of and to operationalise the offloading of shipboard captured CO2.

Oil Sinks Further Below $80 Amid A Broader Equities Sell-off

A host of factors contributed to bearish sentiment within crude circles.