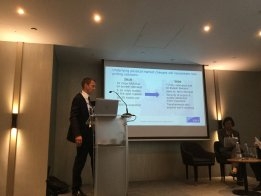 Argus vice president for business development Tracey Vowel told her company's forum in London yesterday, that "the market looks to be pricing in the IMO2020 effect" but that uncertainty among players remains high.

Vowel citing traders reluctance to move high sulfur fuel oil (HSFO) from Middle Eastern markets to Europe or Asia as an example of the hesitancy prevalent in the market. In addition, HSFO storage is being run down in the run up to IMO2020.

"Any type of supply jiggle with have a bigger impact because HSFO storage is tight," Vowel told the Argus Marine Fuels forum.

According to Argus' assessments, the differential between 0.1% marine gasoil and high sulfur fuel oil in Rotterdam barges is $266 per metric tonne (pmt).

At the point where the IMO rule comes into force — January 1 — that number will move towards $420 pmt, according to Argus' consulting arm.

London managing editor Andy Bonnington said that Argus expected the structure of the Rotterdam fuel oil market to change under the new IMO rule. The market is known for its high degree of commoditisation, he said. But, under IMO2020, it will become increasingly "segmented" making the it harder to price. Market features such as the loading VLCCS [with fuel oil] for arbitrage may change while the importance of Rotterdam barges as a pricing base could wane, he added.

Vowel said that Argus Media is committed to reflecting the market "as it trades".