Former Trefoil COO Elfrink: Exit Was Not an Easy Decision 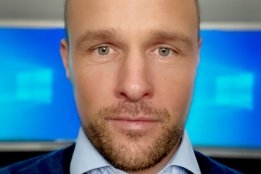 The former COO of Trefoil Trading, Maurice Elfrink, says his decision to leave the firm last month was not an easy one, but it was made so he could "start a new adventure" within the industry.

"It has been a pleasure to work with Trefoil for almost a decade and be a part of the success that was achieved as physical bunker supplier in the ARA and Hamburg area," Elfrink told Ship & Bunker via email.

"I have tremendous respect for the dedicated Trefoil team and the Burando (mother company) management team.

"I would like to personally thank the Trefoil team, the entire Burando staff and the owners for the past years."

Elfrink had been with Trefoil since 2011.

As for details on his next steps, Elfrink said it was too early to give further details but was expecting to make an announcement in mid-January 2021.

Duqm Bunker Supply to Launch at End of November

The bunker barge for the operation, the MT Alpha, has arrived at Duqm.