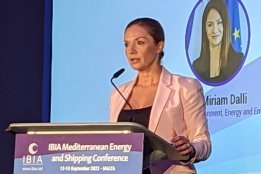 The government of Malta expects to see the upcoming 0.1% sulfur emission control area in the Mediterranean driving investments in cleaner shipping technologies.

The country's minister for the environment, energy and enterprise, Miriam Dalli, addressed the issue in a keynote speech at the IBIA Mediterranean Shipping and Energy Conference in St Julian's on Wednesday.

"The bold initiative of declaring the Mediterranean as a sulfur emission control area can lead, eventually, to a proper investment in cleaner fuels for ships, and as a result, cleaner air around our coastal areas," Dalli said.

"This reaffirms the pledge made by the European Union and Malta to be at the forefront, and also a leader, in this transition."

In June the IMO approved plans (link https://shipandbunker.com/news/world/611246-mediterranean-eca-approved-at-mepc78) to impose a 0.1% sulfur limit for ships' emissions in the Mediterranean.

If adopted at the next meeting of the Marine Environment Protection Committee later this year, the new 0.1% sulfur limit could come into force as soon as 2025.

Northwest Europe introduced a similar ECA at the start of 2015. The move had a profound effect on the bunker market, shifting demand from all ships without scrubbers from HSFO to 0.1% sulfur fuels including MGO and ULSFO.

The upcoming ECA would be likely to make scrubber investments more attractive for ships spending significant amounts of their time in the Mediterranean, as well as increasing MGO demand in the region. It could also prompt increased purchases of ships running on alternative fuels without sulfur emissions, such as LNG.

For Malta to take full advantage of the likely growth in scrubber installations, it will need to increase HSFO supply. Market sources told Ship & Bunker that only one supplier in Malta currently has HSFO availability.

Franck Lauwers, programme officer for prevention at the Regional Marine Pollution Emergency Response Centre, also lent the plan his support in comments at the conference.

"It will mean a significant reduction in shipping's negative effects on human health and the environment through lowering emissions of sulfur oxides and particulate matter," Lauwers said in a panel session.

"It would also contribute to reduce our desertification and reduce harm to crops, forests and aquatic species."

Lauwers cited research estimating the additional costs per year imposed by the Mediterranean ECA of $1.761 billion, and the potential benefits at more than $2.4 billion.

"...and it may never happen," IBIA Director and IMO Representative, Unni Einemo, tells the IBIA Annual Convention in Houston today.

The initiative will be in place before December 5, when the EU's ban on seaborne Russian crude imports comes into force.