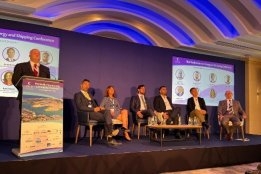 The panel, was at the IBIA Mediterranean Energy and Shipping Conference in St Julian's on Wednesday. Image Credit: IBIA

A panel session at IBIA's Malta conference this week saw an at-times heated debate on the potential for further regulation to improve the bunker industry's prospects.

The panel, moderated by Ship & Bunker managing editor Jack Jordan, was at the IBIA Mediterranean Energy and Shipping Conference in St Julian's on Wednesday.

Kenneth Dam, global head of bunkering at TFG Marine, called for a global effort to replicate the bunkering standards established by Singapore.

"What I think we should discuss is how come Malta, how come Turkey, how come other main spots in the Mediterranean are not ready to do the changes that we have seen Asia doing in order to keep their volumes and keep their business," Dam said.

"If we don't change, if we don't address these topics, we will not see Malta become a port at which perhaps 12,000 ships could be calling next year."

The specific changes he was referring to were bunker supplier licensing and the mandatory use of mass flow meters, Dam clarified. TFG Marine has started to campaign this year for the wider use of MFMs around the world.

"We have to adopt similar practices worldwide at the main hub ports so that they can be role models for the minor ports," Irene Notias, country manager for Greece at Sing Fuels, said in the panel discussion.

"Every government should be lobbied by IBIA or by our companies to make this a law."

Singapore made the use of MFMs mandatory for fuel oil deliveries in 2017, a move which has since been widely welcomed in the industry worldwide. But other port and maritime authorities have yet to follow suit.

In a recent survey by IBIA and BIMCO, respondents rated their support for MFMs on a scale of one to ten at an average of 8.43.

A bunker supplier in the audience pointed out that Malta already had a longstanding licensing system for its marine fuel suppliers. Asked about the likely effect of a government-enforced mandate to use MFMs, the supplier remained neutral.

"If they want to make us use mass flow meters, it's fine, but I don't think it's needed," the supplier said.

The supplier went on to highlight that the government in Malta was struggling to rid the market of alleged offshore supplies of smuggled Libyan gasoil outside of its territorial waters, which undercut prices from the market's licensed suppliers, and that resolving this would be a more important issue to take on.