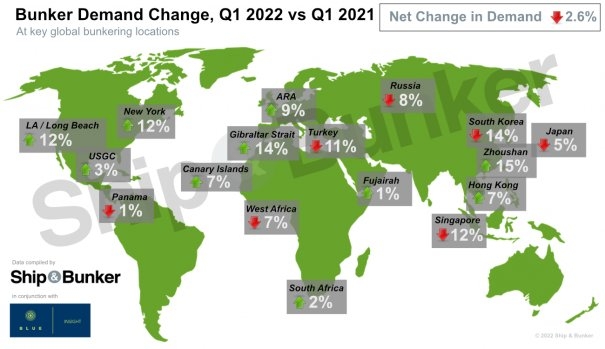 Demand at key marine fuel hubs slipped on both a yearly and quarterly basis in the first three months of 2022, according to the latest market survey of bunker sales volumes in 17 leading global locations, as COVID-19 restrictions in Asia and the initial impact of the Ukraine crisis left markets in turmoil.

As in previous quarters, Ship & Bunker and consultancy BLUE Insight surveyed bunker market participants around the world alongside official data where available and found an average drop of 2.6% in volumes in the first quarter from the same period of 2021. The year-on-year decline compares with a 5.7% year-on-year gain in the fourth quarter of 2021. Q1 volumes sequentially were 3.6% lower than in Q4 2021.

"We're starting to see some shifting in demand patterns around the globe as a result of the Russian invasion of Ukraine," Adrian Tolson, director of BLUE Insight, told Ship & Bunker.

"It's not as predictable in some locations -- notably the ARA hub and Singapore -- as one might expect.

"Severe backwardation in markets is obviously favouring those locations that are not as dependent on cargo movement for supply."

The biggest complication facing the market has undoubtedly been the fallout from the Russian invasion of Ukraine, launched in full on February 24.

A wide range of shipping and bunker companies immediately stopped work at Russian ports. Most top bunker companies are now refusing to refuel Russian-affiliated ships, and a smaller group are declining to deal in Russian-origin oil altogether.

The initial impact appeared surprisingly to favour Northwest European over Asia-Pacific bunker ports, with Singapore's Q1 bunker sales slumping to a 6 1/2-year low while Rotterdam's jumped to a seven-year high.

COVID-19 may explain some of the weakness in Asian demand, with Shanghai still in lockdown in the first quarter and shipping in the region heavily disrupted.

Singapore was also facing an HSFO contamination crisis that damaged as many as 80 ships in February and March, although this was not publicly revealed until March 11.

The most obvious impact of the Russia crisis has been to drive a surge in bunker prices since late February. Ship & Bunker's G20 Index of VLSFO prices at 20 leading bunkering ports jumped to a record of $1,040.50/mt on March 9 that was not beaten again until June 3.

That rise in prices should drive healthy profit margins for the bunker industry, but will also tighten the availability of the credit that the industry relies upon.

Last week Søren Høll, CEO of marine fuels trader and broker KPI OceanConnect, said the firm had seen good traction at the start of 2022, and had a positive outlook for the rest of the year.

"We're quite confident that we can keep up the momentum here," he said.

The full breakdown of the survey results including sales volumes in each bunkering region for Q1 2022 and 2021 is available for subscribers by clicking here.

Further disruption can be expected in the second quarter's figures as the full impact of the Ukraine crisis is felt, as well as the complications from the Singapore contamination problem and the tentative reopening of Shanghai.

"Q2 should consolidate some longer-term shifts, but don't be surprised to see more changing patterns in the second half of this year as Europe tries (and is forced) to remove Russia from its supply sources," Tolson said.

"The recession watch will have an impact on global bunkering demand; if international trade is impacted, then overall bunker demand will take a hit."

C-Job Naval Architects has been chosen to develop the ferry's design.