S&B ANALYSIS: Assessing the Impact of the Russia Crisis on Bunker Markets

Three months into the geopolitical crisis launched by Russia's invasion of Ukraine, the bunker market is showing remarkable resilience in the face of its impact on global energy supply.

Russia launched a full-scale invasion of Ukraine in late February after building up a military presence on its borders in previous months, prompting near-universal condemnation from Western politicians, a wave of sanctions and some voluntary measures by companies no longer willing to do business with the country.

Most of the biggest firms in the bunker industry have publicly stated they have halted deals at Russian ports and with Russian-affiliated ships, and some have stopped dealing in Russian-origin oil altogether. The European Union is looking to block all imports of Russian oil, despite some internal opposition.

For the bunker market the idea of coping without Russian-origin oil should come as a profound shock. Russia was a mainstay of global bunker production in the pre-IMO 2020 years, with the abundant residual fuel oil yields of its refineries supplying the needs of a large share of the global bunker market.

While direct sales at Russian ports have declined significantly in the post-IMO 2020 era as demand shifted to VLSFO -- dropping from almost 17 million mt in 2019 to about 7 million mt last year -- Russia continues to play an outsized role in the global bunker market.

Much of its fuel oil exports still end up in Europe and then shipped out to Asia-Pacific, via the Baltic in the north and the Black Sea in the south of the country.

Russian straight-run fuel oil and vacuum gasoil exports have become an increasingly important refining feedstock for middle distillate production elsewhere in the world, particularly in the US Gulf. And Russia's Urals crude blend that it exports around the world produces a high residual fuel oil yield when refined, meaning its absence will also be felt sharply.

All of this should be leaving the global bunker market in crisis as it scrambles to find replacement fuels elsewhere in the world. But thus far, the market appears to be adapting calmly. 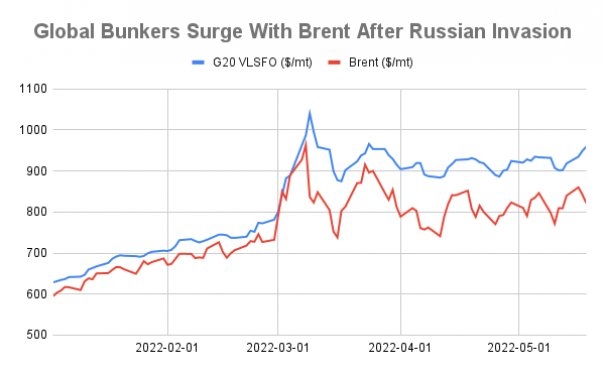 The biggest impact seen thus far has been in outright prices following crude higher in response to concerns over global energy shortages.

The global average VSLFO price hit a record high of $1,040.50/mt on March 9, according to Ship & Bunker's G20 Index of prices at 20 leading bunkering ports, up by 64% from its level at the start of the year.

The price has come down somewhat since then and fluctuated significantly in response to geopolitical news, and was at $969.50/mt on Wednesday.

This surge in prices is largely a windfall for the bunker industry. Bunker trading margins traditionally climb in a close relationship with crude prices -- although there had been reports that they were slower to rise with last year's crude gains -- and companies are already starting to report improved profitability as a result.

World Fuel Services has said its marine fuel profits per tonne sold rose to the highest level since the IMO 2020 transition in the first quarter, while Bunker Holding expects to report the second-best earnings in the company's history for the year to April 30. 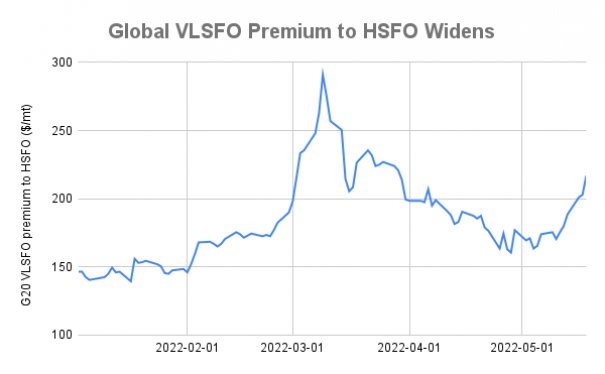 The war in Ukraine has delivered a wider fuel discount for ships with scrubbers. Image Credit: Ship & Bunker

Given Russia's prominent presence in global fuel oil markets -- the country exported 2.72 million mt of fuel oil in February -- one would expect HSFO to be the bunker grade hit most sharply by the slow phase-out of Russian oil. But this has not proven to be the case.

The spread narrowed after that peak but has been widening again since the start of May, reaching $217/mt on Wednesday.

The reasons for this could be down to fuel oil having a more stable base demand rate from power generation in emerging markets, or just VLSFO prices tending to move in a more volatile manner than HSFO in response to crude prices. 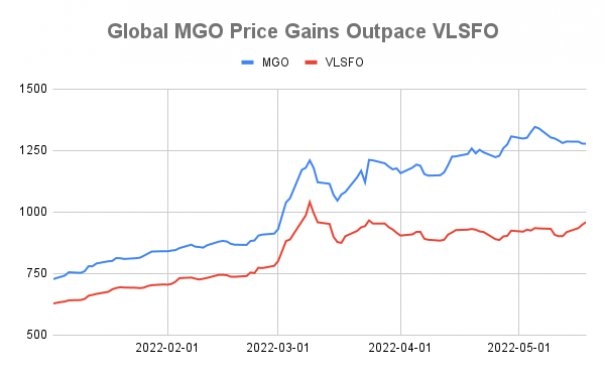 In fact, MGO looks like being the bunker grade with the biggest impact from the war in Ukraine.

This is likely to be down to the changing nature of Russian oil product exports in the past few years. Russia made significant strides to upgrading its refineries in anticipation of the IMO 2020 shift prompting lower HSFO demand, and is now a much larger supplier of middle distillates including gasoil to the global markets.

The fact that Russia's straight-run fuel oil and vacuum gasoil exports are increasingly used as a refinery feedstock for middle distillate production in the US Gulf is also contributing to a global gasoil shortage as these exports are no longer welcome in the US. Middle distillate stocks at key US hubs have fallen to multi-year lows since the outbreak of war. 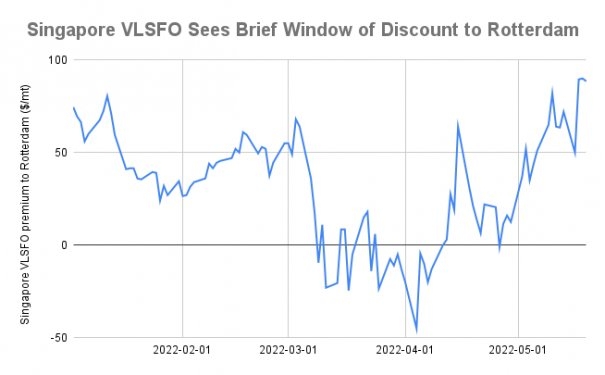 Singapore had cheaper VLSFO than Rotterdam for much of April. Image Credit: Ship & Bunker

Inter-port price spreads within global VLSFO markets appeared to show a profound shift emerging in the early stages of the Russia crisis, but this trend has since reversed.

As Blue Insight's Adrian Tolson pointed out in April, the war in Ukraine appeared to overturn the normal rule of Rotterdam being the cheapest major bunker hub, being supplanted by Singapore.

Rotterdam has traditionally had the cheapest bunker prices among hubs because of its close proximity to Russia's Baltic fuel oil exports, with this fuel oil steadily becoming more expensive as it gets exported further from Russia through Europe, the Middle East and on to Asia Pacific.

But Rotterdam's VLSFO discount to Singapore disappeared at the start of the crisis.

VLSFO delivered in Singapore came at a discount of as much as $45/mt to Rotterdam's levels by April 4, according to Ship & Bunker prices, compared with a $78/mt premium at the start of the year and a $27/mt average premium in 2021.

But this discount was short-lived and has turned back into a premium consistently since April 27, standing at a $90/mt premium on Wednesday.

In fact, Rotterdam appears to be faring better than Singapore in terms of marine fuel demand so far this year. 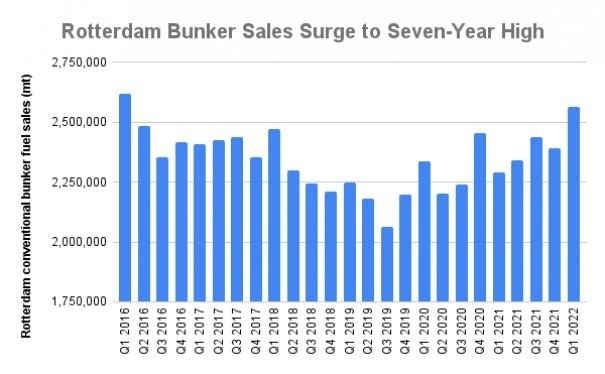 The Dutch port reported conventional bunker sales were at a seven-year high in the first quarter. At the same time, Singapore's marine fuel sales hit the lowest level since the second quarter of 2015 in Q1. 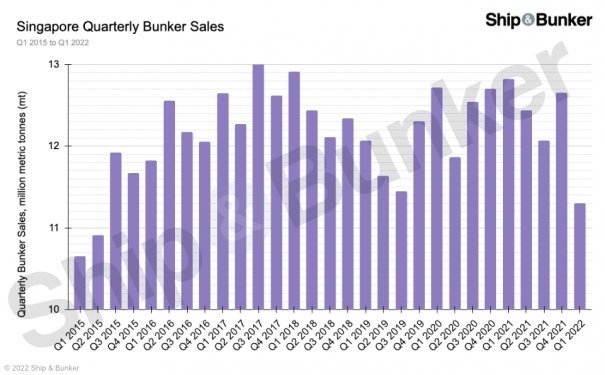 The impact of the war on energy markets is still in its infancy, and much sharper price and demand moves may still be to come later this year, particularly if the EU succeeds in banning Russian oil imports outright.

But for now, it appears that renewed COVID-19 lockdown concerns in Asia are having a bigger impact on global bunker demand than the Ukraine crisis.