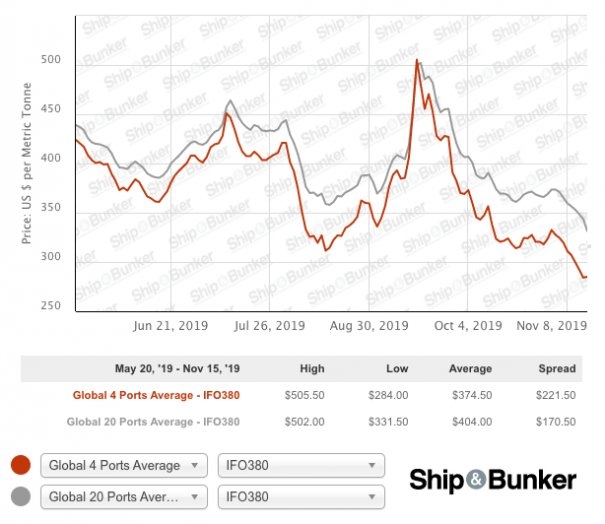 The upcoming IMO2020 rule looks to have helped Shell make over $1 billion this year from fuel oil trading.

The energy major passed the milestone earlier this month, according to a report from Bloomberg.

Others players involved in the bunker supply chain are also been seeing good returns from market disruption ahead of the upcoming fuel rules, which will see the global sulfur cap on marine fuel fall to 0.50% from January 1, 2020.

Shell has not commented directly on the matter, although in its latest earnings report said there had been "stronger contributions from oil products trading and optimisation, mainly fuel oil", and during its latest earnings call, CFO Jessica Uhl pointed to "various things that are going on the market with the change in the fuel standards."

While exact details of how Shell's profits were made remain unclear, there has been significant market volatility ahead of IMO2020 as the new fuel regulation effectively rules out the use of HSFO going forwards for all but the relatively few vessels fitted with scrubbers.

Adding to the uncertainty is that opinion varies on exactly how many ships will have the technology installed next year and what level of ongoing HSFO demand this will result in.

The recent drone attacks on Saudi Arabian oil facilities have also contributed to the disruption, particularly in Singapore.

Between August and September this year Ship & Bunker's Global 4 Ports Average index for IFO380, which tracks the average bunker price across the four major bunkering ports of Singapore, Rotterdam, Fujairah, and Houston, bounced from a two-year low to a five-year high.

the opportunity from volatility swings both ways, and it remains to be seen if there are any losers from the recent conditions too

The index Thursday had again crashed to its lowest in well over two years at 284/mt, its lowest since June 22, 2017.

There has also been higher than usual variance day-to-day and port-to-port, with prices jumping as reports come in that a port or supplier might be running low on HSFO, or logistics have come under pressure as assets are switched to VLSFO supply. At times it has caused some unusually high spreads among the daily price indications for certain markets.

NSI's Paul Hardy also pointed to this dynamic last week, saying quotes that were $30/mt off the market are just a reality of today's market.

Volatility creates opportunity, and Shell do not appear to be the only ones to have been able to benefit from recent market conditions.

At the end of last month World Fuel Services' marine division delivered its strongest quarter in almost five years. CFO Ira M. Birns pointed to the Saudi Attacks and IMO 2020 as factors, and that he also saw opportunity for its marine unit in Q4 due to IMO2020 volatility.

If Ship & Bunker sources are to be believed, other suppliers in the industry have recently been fixing deals at margins not seen for several years, so in the coming months we should not be surprised to see others reporting some very positive results also.

Of course, the opportunity from volatility swings both ways, and it remains to be seen if there are any losers from the recent conditions too.

The company's bunker barge the Bonaire Trader -- previously operating at South African ports -- has now arrived in Houston and is serving customers.

The organisation has commissioned research from Germany's Öko-Institut that confirms ammonia has 'high potential'.

Analyst argue about what's in store for the market.