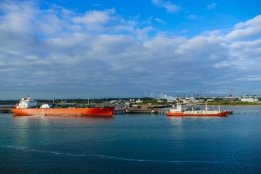 Global refiners are increasing the production of low sulfur fuel oil and marine gasoil to meet demand from IMO2020, according to Reuters.

In a state of play round up in the refining sector on how the top players are getting IMO2020 ready, the news agency details developments region by region.

In the US Gulf, a major global refining base, most refiners are able to process heavy crudes used to make IMO-compliant marine fuels, and have spent heavily this year refurbishing distillation units and cokers to process cheaper, heavy grades.

Motiva Enterprises has overhauled its Port Arthur refinery so it can produce compliant fuels while PBF Energy has restarted a coker at its Chalmette refinery. The unit had been idled for nine years, according to the report.

Other instances cited in the report and covered by Ship & Bunker include moves by Peninsula Petroleum and Gunvor in Europe.

LNG bunkers priced in HSFO terms overtook VLSFO prices at Rotterdam on June 14 and have remained at a premium since then, according to Ship & Bunker pricing.