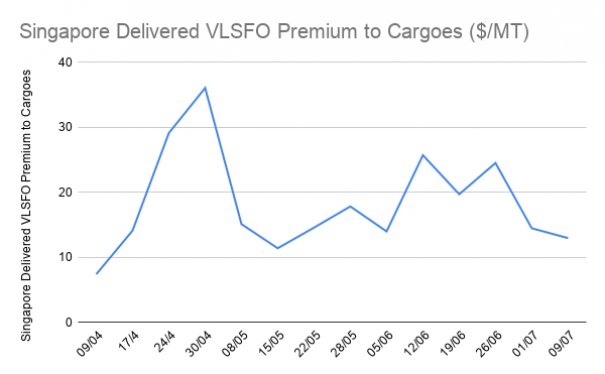 Bunker margins in Singapore have almost halved over the past two weeks, in a further sign of the COVID-19 crisis catching up with the world's largest bunkering hub as volumes there decline and fuel oil stocks rise.

The premium for delivered very low sulfur fuel oil (VLSFO) in Singapore over local cargo prices dropped to just $12.95/mt on July 9, according to price reporting agency S&P Global Platts, down from $24.52/mt two weeks earlier. The record low for the spread was $7.39/mt, reached on April 9.

The Singapore bunker market has generally weathered the COVID-19 crisis better than other locations, so far this year, benefiting from demand congregating in the larger hubs at the start of the pandemic.

Demand in Singapore climbed for several straight months up to May, but it has now seen small declines for two months in a row. The latest figures from the Maritime and Port Authority show volumes slipping by 2.3% on the year to 3.829 million mt in June, the lowest monthly figure since October.

But outright prices in Singapore have remained relatively firm over the past few weeks, according to Ship & Bunker pricing. Since the start of June VLSFO prices there have been in a range of $293-338.50/mt, and Singapore currently has the highest VLSFO price of the top four biggest bunkering hub.

The container industry already has a return to normal operations in sight, and when a recovery comes, Singapore should be one of the first locations to benefit from it. But the market may see a few more slow months before that happens.