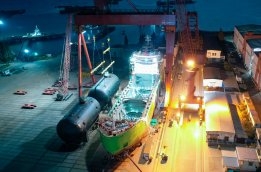 The barge will deliver LNG bunkers to customers at ports in the Baltic. Image Credit: Gazprom Neft

The ship has now been fitted with two 2,900 m3 LNG tanks, Gazprom Neft said in a statement on its website Thursday.

The ship will be used for LNG bunkering at Baltic ports including St Petersburg, Ust-Luga and Primorsk.

"Up to now, 70% of the main construction works have been completed: the assembly of the ship's hull has been completed, the power plant and fuel tanks have been installed," Alexey Medvedev, general director of Gazpromneft Marine Bunker, said in the statement.

"The next stage will be the launch."

In July Medvedev said the company's LNG bunker supply operation was expected to launch next year.

The company's system is currently in use in 12 vessels on the water, and the firm in total has signed 70 installation deals.