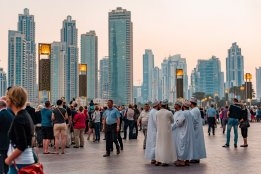 The new hire is based in Dubai. File Image / Pixabay

Matthew Pilgrim joined Fratelli Cosulich's Dubai office as senior bunker trader on Tuesday, according to an update to his LinkedIn profile.

Pilgrim had previously been a senior bunker trader and broker for LQM in London.

Marine fuels conglomerate Bunker Holding announced the closure of the London office of its subsidiary LQM in January, saying the firm's US operation would be its 'main pillar' from then on.

Fratelli Cosulich is expanding away from its core market in Singapore, opening an office in Greece in December and announcing plans for an LNG bunker supply operation in the Mediterranean last month.

The company already has a test engine running 'very well' on a 70% ammonia blend.

The vessel is fully powered by its 1,300 kWh battery system, and will mostly be charged overnight.

The company is already in discussions with suppliers.