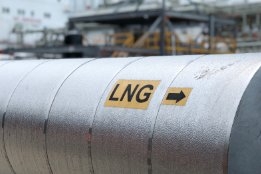 Ship & Bunker data assessed in cooperation with local LNG bunker supplier Titan LNG showed this week's LNG-380e price at $1396/mt (the price for an amount of LNG with the same energy as 1 mt of traditional fuel oil bunkers), down from last's week's high of $2053/mt.

Geopolitical issues and disruptions to the supply / demand balance in Europe have caused a much publicized spike in gas prices, which have surged since the summer.

Having started the year at an LNG-380e price of $365/mt (vs VLSFO in Rotterdam at $391/mt) LNG was priced lower than oil bunkers until June, after which LNG-380e prices broke the $1000 barrier in September before passing the $2000 mark last week.

Demand for LNG has continued to remain robust, however, with Rotterdam official figures showing Q3 LNG bunkers sales gaining 338.6% to 213,250 m3, the three month total being higher than the Port's total annual sales in 2020.

The systems will be installed in the second half of this year.

The combined firm would operate under the name Frontline, with current Euronav CEO Hugo De Stoop as CEO.

Oil Sinks Under The Weight Of China Lockdown Fears

However, the European Union may cause sentiment to return to supply fears.