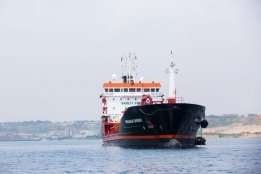 Global bunker supplier and trading firm Monjasa has sold a tanker from its West African operation.

The 5,812 DWT tanker Monjasa Chaser was delivered to its new owners on August 10, the company said in a LinkedIn post on Tuesday. The firm will be replacing the vessel to maintain the scope of its operation in West Africa, a company representative told Ship & Bunker.

The representative declined to comment on the vessel's buyer or other details about the transaction.

Monjasa took on the Monjasa Chaser -- previously called African Chaser -- as it opened a new West African office in Luanda in 2019 to support its operations there.

Monjasa sold a total of 1.1 million mt of bunker fuel across West Africa in 2021.

"With extensive logistics and around 10 active tankers in West Africa, we are always active in the market for further quality tonnage," the company said in the post.

Oil Up On Strong Economic Signs, But Worries Over The Economy Persist

The Department of Energy has awarded classification society ABS with the contract to carry out the $800,000 study.

The firm has acquired the four Suezmax tankers for $222.5 million, with delivery planned between August and October.