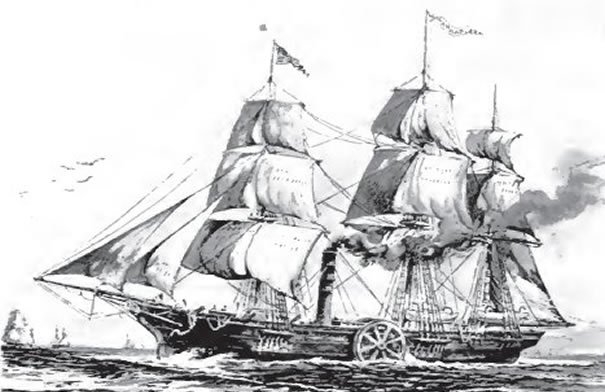 On May 24, 1819 the SS Savannah made history as the first wind power hybrid steamship to cross the Atlantic. The journey from her namesake city in Georgia, US, to Liverpool, England, took 29 days. While she only used steam power for 90 hours of that time, the potential for hybrid marine power had been shown.

there are few left in the industry who remember commercial sailing ships, let alone those who know hybrid wind propulsion systems are a 200 year old idea

Since then, commercial marine power transitioned first to coal and now oil, and there are few left in the industry who remember commercial sailing ships, let alone those who know hybrid wind propulsion systems are a 200 year old idea.

In recent years there has been increasing momentum behind the idea of once again powering commercial vessels with sails. Indeed, at the end of 2014 the International Windship Association (IWSA) was launched with the aim of promoting wind propulsion for commercial shipping worldwide.

One such company hoping to make commercial hybrid wind power a reality is Japan's Eco Marine Power (EMP), who has its "EnergySail" rigid sail technology and the heart of its wind and solar power ship propulsion system.

Last year EMP announced it had formed a notable relationship with Japan-based marine equipment manufacturer Teramoto Iron Works Co. Ltd. (Teramoto Iron Works). In a time when wind powered commercial vessels are a thing of the past, this is one of the few companies in the world to have ever manufactured rigid sails for commercial shipping.

The company was established in May 1934 in Onomichi, Hiroshima Prefecture, Japan, where it is still headquartered. At its inception it was involved in the production and sales of equipment for major shipbuilding companies, but expanded its offerings to include steel frames, bridges, oil rig products, and dredging equipment.

More recently the company has developed an innovative "Jack-up type deck lifting-lowering device" that it says is expected to considerably improve the lifting-lowering speed and safety performance of work pontoons used for marine construction.

When oil prices go up, so does the price of bunkers, and the industry looks to ways of reducing consumption. We know this to be true today and thanks in part to rising oil prices in the 2000's that ended with Brent's historic July 2008 high of $147 per barrel, now almost every new ship ordered is a so called "eco-ship" offering improved efficiency and reduced bunker consumption.

The situation was the same in the 1970's, when between October 1973 and March 1974 the price of oil quadrupled. It was at this time that researchers and a number of companies in Japan looked to rigid sales to improve fuel efficiency. 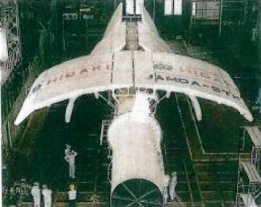 Together with Teramto Iron Works, they developed the "JAMDA" sails and subsequently a number of units were manufactured in Onomichi, and their solution was installed on several vessels including the Shin Aitoku Maru and Usuki Pioneer. On average, the use of the JAMDA sails was said to have achieved annual fuel savings of around 10 percent on the ships they were fitted to.

As oil prices fell, the cost savings that the rigid sails provided was undermined, and widespread acceptance of the idea was never gained.

But some 40 years later, and 196 years after the SS Savannah made history, Teramoto Iron Works and EMP are now working on what they hope will be the next chapter in hybrid wind powered commercial ocean going vessels.

Together, they are looking to produce commercial versions of both the EnergySail and the Aquarius MRE System – an integrated wind and solar power solution for ships including computer control systems and storage method for EnergySails.

Earlier this month the companies agreed to establish a new development and test facility in Onomichi, the Onomichi Marine-Tech Test Center or Onomichi MTTC.

There they plan to build and test a complete Aquarius MRE System with production due to start during 2015. 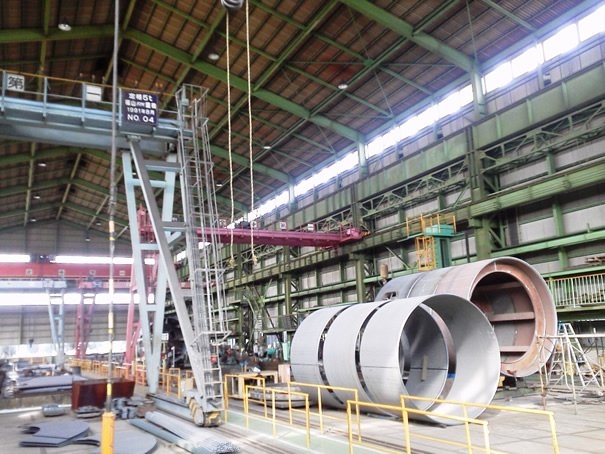 The Chojahara workshop, Onomichi - one of the Teramoto Iron Works factories that will be involved in the production of the EnergySail.

The firm has ordered 12 24,000 TEU dual-fuelled boxships with the ability to run on methanol.