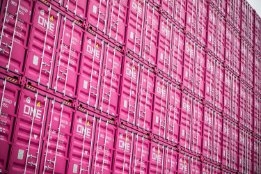 ONE is the sixth largest carrier with 6.6% of global capacity. Image Credit: ONE

Ocean Network Express Pte. Ltd. (ONE) has announced it will add six new 24,000 TEU capacity mega-boxships to its fleet, making them the largest such ships in the world.

Of particular note to those following developments in the marine fuel space is that the ships are intended to be powered by conventional bunker fuel and fitted with scrubbers.

In contrast, the six 23,500 TEU capacity ultra large container vessels (ULCVs) ordered by Hapag-Lloyd this month will be dual-fuel LNG-powered.

Similar to Hapag-Lloyd, ONEs vessels will be delivered in 2023 and 2024 with industry specialists Alphaliner noting the orders are a coordinated effort between the two THEA partners.

"Adding to twelve 23,500+ TEU vessels brought into service this year by alliance partner HMM, this would give THEA two super-high-volume trunk loops at the backbone of its Asia – Europe network," Alphaliner said in its latest weekly report.

The orders come at an interesting juncture for a marine shipping industry that is seeking to reduce its emissions footprint in line with the IMO 2030 and IMO 2050 emissions targets.

The newbuilds will certainly feature as part of the global fleet in 2030, at which point the industry as a whole is aiming to have reduced its carbon intensity by 40% compared to 2008 levels.

With owners aiming for 30 years of service from their ships, they may well see the 2050 target as well - although some see IMO's 2050 goal of an absolute GHG reduction of at least 50% meaning the lifespan of some vessels will be cut short.

Any specific rules dictating exactly how IMO's emissions targets will be met are yet to be decided, so it remains to be seen how well these newbuilds will fit into the future regulatory landscape.

LNG advocates have repeatedly stated that LNG provides the industry with a pathway for meeting the 2030 target, but if nothing else ONE's order suggests they feel conventional bunkers will do the job just as well. The carrier says its new ships will "significantly lower carbon emissions through a state-of-the-art hull design that aims to maximize cargo intake and minimize fuel consumption."

The order will no doubt also be a boost for scrubber manufactures; the fact ONE sees a long-term future for the tech will presumably be welcome news after interest in EGCSs was decimated this year following the collapse of bunker prices and the high/low sulfur spread, and particularly as in November last year ONE was singled out as being the only top 10 carrier who had opted not to install scrubbers.

ONE is the sixth largest carrier with 6.6% of global capacity, according to Alphaliner data.

CLIA: "Hope and Optimism" for Cruise Sector in 2021

The new hire has joined the company as of this month in a 'commercial bunker development' role.