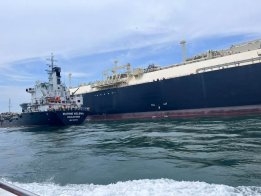 The Papua was the receiving vessel and the delivered fuel was a "0.50% sulphur residual-based fuel processed with up to 25% waste-based fatty acid methyl esters", the company said in an emailed statement.

The bunkering operations to the same ship chartered to Papua New Guinea LNG Global were undertaken in August and September.

"This trial phase is an important step as we continue to test viable marine biofuels as an engine-ready alternative to conventional fuel oil," said Andre Kostelnik president of ExxonMobil's shipping arm SeaRiver Maritime.

ExxonMobil joins a raft of its peers who have also been keen to demonstrate their involvement with biofuels, with suppliers including Total Energies Marine Fuels (TMF), Toyota Tsusho, and Good Fuels among those to highlight similar bio-bunker milestones in recent weeks.

In that time bunker buyers including Orient Overseas Container Line Ltd. (OOCL) and Hapag Lloyd have been equally keen to highlight their participation in trials of biofuel.

As the industry looks to decarbonise its operations, biofuels are proving to be a popular option for the industry as they hold the promise of being almost completely carbon neutral, while their 'drop in' nature mean vessels require practically zero modifications to use them.

In contrast, leading alternative fuel candidates including methanol, ammonia, and hydrogen require vessels to have specific fuel systems and engines.

The European Commission issued its ruling on the German stabilisation package for Uniper under EU state aid rules earlier this week.