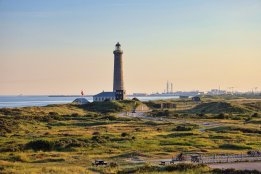 Global bunker supplier Peninsula Petroleum is set to expand its presence in Northern Europe with a new physical supply operation in Skaw.

The new operation will launch with two barges with a combined capacity of about 10,000 mt, the Gibraltar-based firm told Ship & Bunker in an emailed statement on Monday. Supply will come from storage in Gothenburg.

The supplier will offer HSFO, VLSFO and 0.1% sulfur MGO at Skaw after the new operation starts in February.

"Launching Skaw enables Peninsula to further strengthen these supply relationships and to offer increased flexibility and optionality to customers looking to refuel in Northern Europe," Alex Lyra, global head of supply and trading at Peninsula, said in the statement.

"Strategically and operationally we see the move as a good fit for our global physical portfolio."

In the past Skaw as a bunker port has competed with Baltic ports like St Petersburg, as well as the ARA hub, and the dramatic drop in Russian bunker volumes last year is likely to have benefited the Danish port. Bunker volumes at some Russian ports were down by as much as 75% on the year during parts of 2020.

A number of bunker suppliers and traders have announced expansions since the end of 2020. GAC Group has opened a Hamburg office, Bunker One launched a River Thames supply operation, Fratelli Cosulich opened a Greek trading office, TFG Marine announced a Falmouth supply operation and Monjasa expanded its operations in the Middle East.

These operations would benefit from a sharp rally in 2021 of both bunker volumes and prices from 2020's doldrums -- if one appears -- but persistently weak margins are likely to remain a bugbear.

"As we continue to navigate the global pandemic and its impact, it's our duty as a leading global supplier to support our customers where they need us and where we feel that we can provide a differentiated service," John Bassadone, CEO of Peninsula, said in the statement.

"Expanding our regional supply network into Skaw is a great example of Peninsula seeking and finding client solutions which help them execute their bunker procurement strategy.

"2021 will see further expansion for Peninsula."

Product "answers investor demand for access to these disruptive technology companies at the forefront of ocean decarbonization."

The company has signed a memorandum of understanding with MAN ES and Mitsui E&S Machinery looking to buy the engine at a later date.