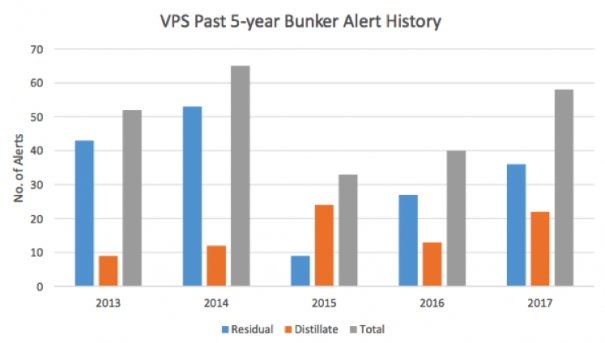 Global Marine Fuel Quality, continues to be a concern for the world's fleet. With this in mind, Veritas Petroleum Services (VPS) have for many years, monitored fuel quality on a daily basis and when necessary, issue "Bunker Alerts" exclusively to ship owners and managers who are using our testing programme. These bunker alerts inform our clients of specific ports where a short-term quality issue relating to a specific fuel grade and parameter has been identified through VPS testing. This in turn provides information to assist our clients as to whether or not to take the risk in bunkering such fuel in that specific port or region, at that particular time.

Following the reduction of the ECA sulphur limit to 0.10% in January 2015, the demand for distillate fuels dramatically increased

Back in 2013-14, the sulphur-limit in marine fuels for vessels sailing within ECA-zones was 1.0% and as such this resulted in the extensive blending and treatment of residual fuels to achieve the legislative sulphur limit. However this high degree of processing of residual fuel certainly led to increased quality issues due to contamination, instability and other problems. Consequently 2014 witnessed the highest ever level of bunker alerts issued by VPS, with well over 50 alerts relating to residual fuel quality being produced.

Following the reduction of the ECA sulphur limit to 0.10% in January 2015, the demand for distillate fuels dramatically increased, resulting in greater levels of treatment of such and as a consequence a reduction in the quality of distillate fuel throughput 2015, which had not been witnessed previously. So this formerly perceived "problem-free" fuel type suddenly exhibited numerous quality issues, such as low flash point and lower stability, highlighted by an increase in distillate bunker alerts.

However, the flip-side of this was a dramatic decrease in the number of alerts issued in relation to residual fuels within the same time period and an improved level of quality for this fuel type.

The influence legislative change can and has had upon fuel and its quality were never more pronounced than the move for 2014 to 2015.

Reviewing the Bunker Alert status for 2017, we witnessed the worst case scenario regarding marine fuel quality, the number of alerts for both residual and distillate fuels increased significantly compared to 2016 by 33% and 70% respectively. 2017 saw the highest level of bunker alerts issued by VPS since the peak of 2014.

High Density, Cat-Fines, Sediment and Sodium were the problematic areas for residual fuel grades, whilst Flash Point and the Cold-Flow properties of Cloud Point and Pour Point, were the areas of concern for distillates. 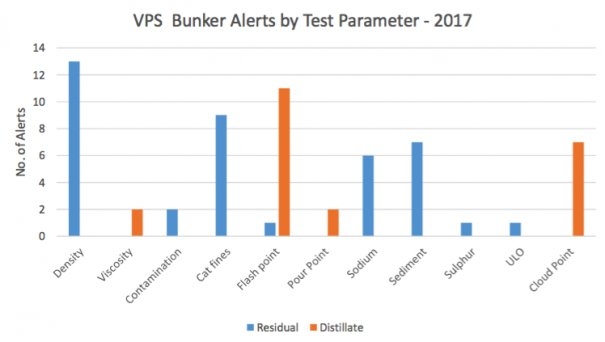 From a regional perspective, of the 31 ports requiring a Bunker Alert release over 2017, 21 were in the Americas, 25 were in Europe, 7 Middle East and 5 Asia.

If we look into the Bunker Alerts issued by region, its interesting to note that regions without internationally recognised ECAs, ie Asia and the Middle East, had no distillate quality bunker alerts. Is this a result of lower distillate treatment and blending due to lower demand for this fuel type across these regions and as such better quality? If fuel quality is reflected by the number of bunker alerts issued, then Asia and the Middle East appeared to have higher quality fuel overall, than Europe and the Americas throughout 2017.

Europe and Americas, when combined had equally as many distillate bunker alerts as residual. Individually Europe had more distillate alerts than residual (14:11) whilst the Americas had more residual alerts than distillate (13:8). 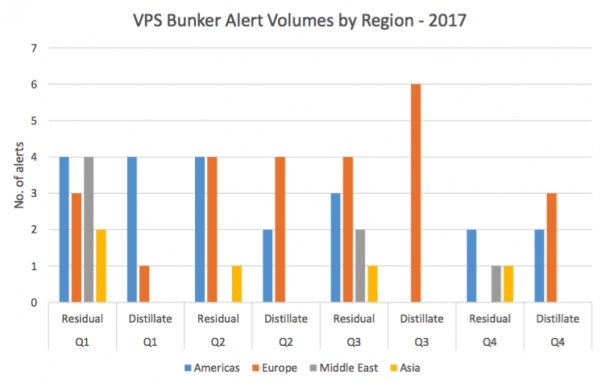 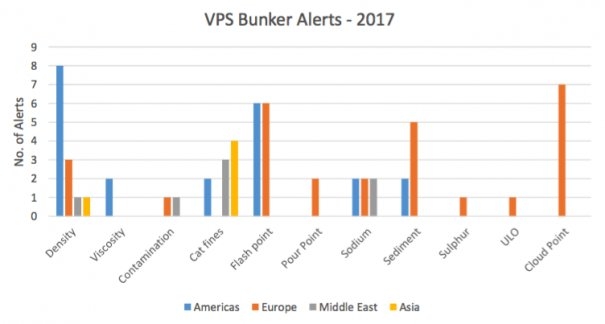 In summary, 2017 showed an increase in the number of quality issues relating to marine fuels, surpassed only by those for residual fuels in 2014 . The past year also highlighted increasing quality issues across the Americas and Europe applied equally to distillates and residual grades.
So looking forward to 2020, if current trends continue, fuel quality bunker alerts will likely increase in number and this of course is a strong indicator that fuel quality will continue to be of concern and an area which should be monitored, ideally pre-burn in order to provide a higher level of damage prevention to the world's fleet, crew and environment. But remember, its possible for such potentially problematic fuel to be delivered anywhere and anytime, therefore the proactive nature of the VPS bunker alerts hold great value to our clients in protecting their assets.

VPS also offers additional tests beyond the standard ISO8217 scope that can help ship owners and managers remove even more risk from their operations. Contact your local VPS office or http://www.v-p-s.com/contact-us/ to explore what more can be done to manage your risks.

Some evidence from Asia but more 'heard not seen' in Europen markets.

The move would take its floating storage capacity up to about 1 million m3.