2020 Sulfur Cheats: Can Monitoring the Emissions of the Entire Global Fleet Ever be Possible? This Company Says "Yes" 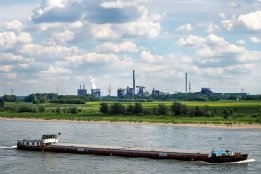 Compliance with the global 2020 sulfur cap on bunker fuel is fast becoming the talking point of the shipping and bunker industry.

The major bunker players, the oil majors and big independent suppliers, will be in line with the new rules and have said as much. But their fear, expressed by Exxonmobil's Iain White at a recent industry event, is that less scrupulous suppliers will seek unfair commercial advantage by not complying with the rules.

Indeed, Petroleum Argus economist Alan Hayes has estimated non-compliance at around an eighth of total bunker demand in 2020.

At present, methods for ensuring compliance are sketchy ranging from "sniffer drones" roaming the Baltic Sea to giving the chief responsibility for checking up on errant ship operators to Port State Control authorities. But what of the other side of the equation, the ship owners and operators?

Certainly, ensuring compliance with the 0.5% 2020 sulfur cap would focus on the fuel sample extracted during bunkering but with the kind of technology now available in the industry, one company is proposing a more up-to-date solution.

By monitoring the emissions from a ship's exhaust, Green Sea Guard B.V. (Green Sea Guard) hopes to allow the ship operator to tick both the compliance and the efficiency box.

"Our aim is to provide payback for the customer from his decision to adopt an automated method of compliance, by providing valuable data on engine performance that also happens to aid compliance," the Dutch company's managing director, Anita Bradshaw, told Ship & Bunker.

The data, which is collected on the company's secure servers via a probe installed into a ship's funnel, can provide for a wide-ranging analysis.

"We provide some analysis from the computer that gathers and forwards the data, and some additional analysis on our server, so that we can advise the customer in general terms of any issues as they arise," Bradshaw said.

"We expect, over time, to provide more sophisticated analysis as the market seems to be very positive about this aspect [of the product]."

Installing the Green Sea Guard device is straightforward enough and takes no longer that a few hours with the product's basic cost coming in at EUR36,000 ($43,000). A leasing option is also available.

One segment of the shipping market that the company is looking closely at is inland waterways with a possible cut-down version of the product to aid expansion.

"Many ships plying inland waters do not have satellite, so we generally install a small antenna, included in the cost, and charge for communication costs as they are incurred," Bradshaw explained.

"We have an existing arrangement with one marcomms provider and are hoping to set up others," she added.

There is a small monthly charge to cover filter changes and maintenance but this aspect can be delegated to the ship's own management team.

"We have pioneered some exciting new techniques involving remote visual inspections to enable this to be outsourced at a very reasonable price."

Bradshaw emphasises that keeping the cost to the customer to a minimum is important as "our primary aim is to accelerate compliance".

Is it realistic to expect enough devices could be manufactured and installed by 2020 to monitor the world fleet? Bradshaw says it is.

Looking ahead, the sense of momentum around the company is palpable. There is an agreement and existing capability in place which should be able to assemble up to a thousand devices a year with two other facilities in the pipelines including on in the US.

And if such emissions monitoring was mandated, is it realistic to expect enough devices could be manufactured and installed by 2020 to monitor the world fleet? Bradshaw says it is.

"I would love to be able to prove this capability by some large orders," she added.

It is a given that the shipping industry will be casting around for suitable methods which companies can adopt to meet the stipulations of the 2020 sulfur cap on bunker fuel. And while it remains to seen which methods will prove to be the most attractive to ship operators, Green Sea Guard's technology-based solution appears to have much to offer.

Oil Steady As Nicolas Peters Out And Rally Support Continues

Strong prices for gas, liquefied natural gas and oil are expected to last over winter.

The Bunker Insights application is a bunkering digitalisation service for both shipping firms and fuel suppliers.